Home > In the Workplace > How to Lead Leaders

How to Lead Leaders 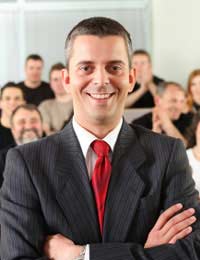 We all know that leaders are important at all levels but for a large organisation, the ability of the top leader(s) to inspire and lead secondary leaders and managers can play a huge part in the overall success of the company, business or organisation.

Since the senior managers and leaders are the ones who will be driving performance throughout the rest of the organisation, it is vital that the chief executives at the top know how to get the most from their senior management.

Problems At The Top?

Studies done by The Gallup Organisation revealed that unfortunately, many senior managers suffer from “leader-bashing” by their top chief executives. The studies asked "C-level" executives in organizations (such as chief financial officers, chief nursing officers, senior vice presidents, chief operating officers and people in similar roles) to describe their experience and the responses highlighted a growing problem in many organisations: the lack of effective leaders to lead leaders.

Complaints such as the following were common:

“I came into this position with years of confident leadership under my belt. I leave it now questioning if I was ever a leader. I know it is partially my fault for staying with a president whose idea of leadership included coercion, subservience, and threats. He beat his senior team down on every occasion. His edicts were accompanied by threats and penalties. He rarely recognized good work. When he did recognize someone, it was used to point out where others on the team had failed.”

An Effective Leader Of Leaders

In many ways, the same attributes which are required for effective leadership in other settings are needed here as well. So, for example, a good leader of leaders needs to be able to inspire their senior executives to get the best performance from them.

But in addition to this, an effective leader of leaders must try to achieve the following:

Surrender control - An effective leader of leaders does not fall into the trap of trying to micro-manage his/her senior executives. They step back and allow their senior management team to “own” their decisions for their own departments. Instead of spending their time looking over shoulders, they invest it in developing a team they can trust and preparing their senior executives to take control.

This is often the hardest thing for many leaders to do, even experienced ones, and this is why many organisations end up being “overmanaged and underled” and ultimately end up failing. A wise and effective leader realises that their ability to identify “co-leaders” who have more experience, skills and knowledge in their specific areas of responsibility will result in success for both themselves and their organisation.

Discourage “leader-in-training” mentality - A good leader of leaders trains and develops his senior executives to be leaders in their own right, not just executives who wait for the “real” leader to tell them what to do next. They seek out those who have natural leadership ability and they cultivate it.

How do they do this? They choose people on their senior executive team who are anxious to lead and think like leaders. They let them assume ownership and also give them the opportunity to design how their job functions and how their success can be measured. They create an environment where they can capitalise on every ounce of skill and talent the senior executives possess. Most of all, they create and train a team of senior leaders who can develop their own vision of the future.

Encourage vision and imagination - Great leaders of leaders do not hold their executive team back creatively. They want a senior team with great vision in their areas of responsibility. After all, the size of one’s vision often determines the magnitude of the outcome: greater visions result in greater outcomes.

Someone who is a good leader of leaders will encourage their senior team to act boldly so that they can claim a big vision for their area of responsibility. They position their senior executives for success and by doing so, ensure their own success as the top leader, as well as the success of the organisation.

How Effective is Your Leadership in the Workplace?
Share Your Story, Join the Discussion or Seek Advice..
If there's no clear communication to your senior officers, there's no way to spot what the problem is and squash it.Top executives can't read minds!It may be a good idea to stop being intimidated if the issues involve moving the company forward.
Steve Rogai - 28-Aug-12 @ 10:58 PM
Title:
(never shown)
Firstname:
(never shown)
Surname:
(never shown)
Email:
(never shown)
Nickname:
(shown)
Comment:
Validate: